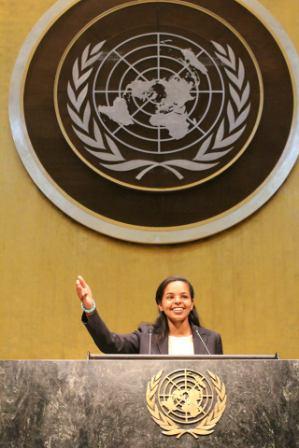 Turning 18 means many different things to many different people, especially as it pertains to making decisions. Sometimes, decision-making is the only thing which readies someone from teenage years to adulthood. For Helen Fetaw, turning 18 meant starting a second year of college 6 weeks ago. Helen’s fateful decision to attend college came at just 16 years old, when she graduated high school. Two years of college brings back memories of the four years she spent in high school, as both experiences brought a meaning of its own to the world of education.

Freshmen are not 16 years old, which Helen Fetaw may rebuttal with the credential that freshmen are not 12 years old either, as she entered high school at twelve and entered college at sixteen. Freshman – a term Helen has heard for what feels like a lifetime – was challenged once Fetaw entered high-school at 12, determined to change the world through education. Entering high school at 12 years old gives an edge to the dynamic of classrooms all over the world, but Helen does not make an exception for completing required coursework. As a graduate of one of the highest ranked high schools in Wisconsin, Rufus King International School, high school was not as much of a breeze as many observe for Fetaw. Because of the college-preparatory program, Helen was well-prepared to attend any college in the United States, regardless of the age comparison to her peers.

“I loved UPenn because of all the opportunities presented to me coming here,” Helen says of her new school. Referred as “UPenn,” the University of Pennsylvania is celebrated for its academic rigor. Attending a college, considered to be an “Ivy League,” however, was not nearly as important as the idea of furthering education for Helen and her family. Immigrating to the United States at just 3 years old provided Helen with a humble spark, which she is most proud of in school. Fetaw often cites school as a catalyst for her family’s achievements, but likes to clarify that school is not an intervention between her and family. “It’s true,” she admits, “I wanted to get a bit away from home, but it wasn’t because I needed to get far away from family and be on my own.” For Helen, being away from home and on her own is attending school in Pennsylvania, where she remains open-minded about her experiences in the United States at such a young age. “UPenn,” Helen says, “is great because you’ll meet people from all over the world and have phenomenal conversations because of all the different perspectives intertwining.”

Starting college at 16 years old has influenced Helen to embark on permanent debates on the importance of education. “Education is important because I think nowadays there are a lot of young people that work to do something greater and change the world.” Helen goes on to explain, “But I don’t think anything can truly be done to having a lasting, positive impact if the person with the intent to make the change is not informed.” Education holds a personal significance to Helen because she “honestly loves learning.” In encouraging people to further their education, Helen notes, “I love being able to bring up things I’ve learned in class in conversations and have different perspectives come in.” To settle all qualms about the importance of education, Helen states, “Even if it’s not doing so right now, it will ultimately affect us all.”

While studying the medical sciences at UPenn, Helen enjoys partaking in many clubs and organizations. Amongst her leadership in the international affairs association and emerging scholars program, Helen can be found on the swim team and salsa dancing. Helen excitedly tells anyone, “At school, I am involved.” The activities, which keep Helen busy between courses do not act as a relief from school, however, as Helen enjoys the challenge of balancing academia and social life.

UPenn’s school newspaper has recently given Helen a space for photojournalism. Helen’s future plans include graduating college, attending medical school, and taking time off to travel. Helen wants to try her hand at Health Policy by participating in global health initiatives.